Retro gaming blog is back after 18+ month hiatus 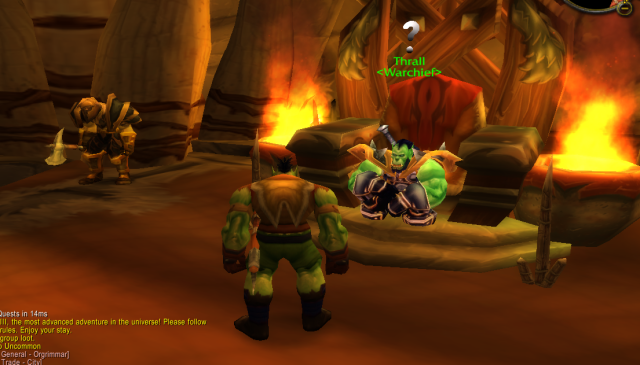 Nearly a month ago I logged on to my email only to find an invite to the Battle for Azeroth alpha buried deep within the promotional folder of my inbox. Needless to say I downloaded the game but I was disappointed to learn that my gaming laptop was not up to the graphical standards to run the game properly, so I was unable to participate in alpha.

This was probably a blessing in disguise as I do not see myself rushing out to buy a new computer solely for the purposes of playing wow in the foreseeable future. Further, I have been having a decent amount of fun lately trying out new alts in my favorite vanilla server and gaming with like minded folks who enjoy the classic version of the game as much as I do.

I like to start off with warriors and I even rolled a human in the Alliance just to try a new experience because I am horde almost every time, being the superior faction but I wanted to try a few different quests so playing Alliance as long as it’s not doing pvp is permissible. The only drawback is that there is none of the additional races that came after Burning Crusade, unless you join special servers for that, so no goblins, no blood elves and no pandas. I am OK with that last one.

I have also been busy alternating between vanilla and DDO. Doing lower level quests in hopes of advancing my toons in DDO is great fun, especially when I can join a guild to help me in my way. Before I used to worry about such nonsense as leveling to cap (I think it’s over 25 now) or making the perfect build, but now I just run dungeons in different settings, normal to elite whenever I can and make progress and have fun, because having fun is the name of the game. DDO is a lot more fun than Neverwinter because it makes it easier to group and I love the instanced dungeons, narrations and opportunity to create PUGS or run a dungeon with a hireling. Also DDO feels more like true D&D to me because of its being based on 3.5 rules set whereas Neverwinter is based on 4th edition rules. Not that it matters much since the latter is mostly hack and slash and questing with pvp thrown in for good measure.

There is no PvP in DDO it makes up for it with a fantastic instanced PvE.

I will be reporting back with other gaming projects as well as my progress on both vanilla and DDO and maybe throw in some Neverwinter and DAoC for good measure. DAoC will offer a free to play version with some limitations to try out some different classes and races in the fall, so I plan to take full advantage of that, but until then I will probably sub in August. I don’t really like Uthgard.

See you all out in classic Azeroth,  Eberron, Neverwinter and wherever else I can scratch my itch for classic mmo games.

I play PC games, mostly old and retro mmos. If you do to then let's play! Nuff said
View all posts by tyroshutterbug →
This entry was posted in Azeroth adventures, Dark Age of Camelot, Uncategorized and tagged Dark Age of Camelot, DDO, mmo, mmorpg, vanilla, wow. Bookmark the permalink.